New 2,200 SF Office Building to support staff from Parks, Fishing Access spots, BMA, and IT. Feasibility of annexing to the City for services versus new on-site systems.

Predesign. We were called in to remodel offices “around a wildlife evidence freezer”,which would have involved rebuilding a perfectly freezer and crane elsewhere, as well as replacing required storage space elsewhere. In our initial conversation about our scope adding overall value to Fish Wildlife and Parks, we identified the opportunity for a new office and field crew building at comparable cost, adding significantly more value for the agency overall.

Program: We collaboratively developed the program to follow new work realities at this agency. We provided smaller private offices equipped with higher acoustical separation since video conferencing from their desks, and conference calls have become a prime activity of the user group. On the other side we saved enough room to create flexible spaces that can function as break room and team rooms.

Design Style. Combining elements of the existing campus architecture such as roof and earth tones, we developed a subtly modern simple addition.

While the State decided not to pursue Certification, we were able to accommodate green design strategies.

We performed both wind and daylighting studies to guide design decisions such as building placement and fenestration.

B) Material efficiency. We eliminated all additional ceilings except in the hallway which functions as the main air distribution core.

C) Site Optimization: The biggest design challenge was optimal placement on site, as we had to weigh factors such as solar orientation, greatly varying soil capacities, and existing campus functions and operations. We interviewed for seasonal variations in time of use scenarios, and were able to manage orientation and fenestration / daylighting by strategic landscaping paired with shading devices. 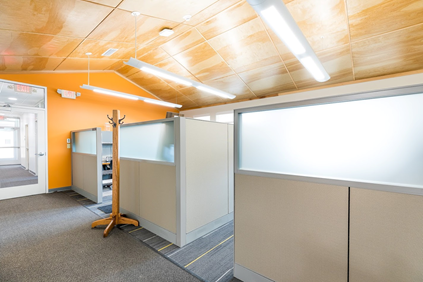 Growing up in a family with generations in medical practice, Sophia discovered her passion for architecture during an internship 1996. Since then Sophia received formal and informal education in Germany and the US. At Arizona State University she was honored by the Henry Adams Certificate for graduating on top of her (Master of Architecture) class in 2005.